Call to revitalize ‘language of the ancestors’ for survival of future generations: Indigenous chief

Hundreds of ancestral languages have gone silent in recent generations, taking with them the culture, knowledge and traditions of the people who spoke them. To preserve and revitalize those that remain, the United Nations on Friday officially launched the International Year of Indigenous Languages, at UN Headquarters in New York.

UN Photo/Manuel Elias
Cultural performance by the Kwakwaka Dancers during a High-level Event to launch the International Year of Indigenous Languages. 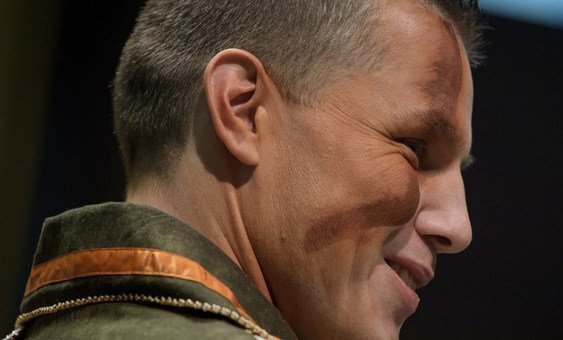 Kanen’tó:kon Hemlock, representative of the Mohawk Nation, at the high-level event to launch the International Year of Indigenous Languages, at UN Headquarters in New York., by UN Photo/Manuel Elias

“We lose our connection and our ancient ways of knowing of the earth when our languages fall silent”, he explained, stressing that “for the sake of future generations we must ensure they too can speak the language of our ancestors”.

UN General Assembly President María Fernanda Espinosa Garcés underscored the close connection between indigenous languages and ancestral culture and knowledge, saying that “they are much more than tools for communication, they are channels for human legacies to be handed down”.

“Each indigenous language has an incalculable value for humankind”, she said, calling each “a treasure laden with history, values, literature, spirituality, perspectives and knowledge, developed and garnered over millennium”.

“When a language dies,” she spelled out “it takes with it all of the memory bound up inside it”.

Indigenous languages are symbols of their people’s identity, “vectors for values, ways of life and expressions of their connections with earth”, according to the Assembly president, who called them “crucial” for survival.

Indigenous languages also open the door to ancestral practices and knowledge, such as in agriculture, biology, astronomy, medicine and meteorology. Although there are still 4,000 in existence across the globe, many are on the brink of extinction.

“This International Year must serve as a platform from which we can reverse the alarming trend of the extinction of indigenous languages”, to recover and preserve them, including by implementing education systems that favor the use of a Mother tongue, Ms. Espinosa stated.

For his part, Evo Morales, President of Bolivia, addressed the survival of indigenous people and languages under the force of colonialization.

“Today we come here having survived the colonial era which has tried to bring our elders to their knees and squash them beneath the weight of injustice”, he said.

Mr. Morales called on those present to work together through dialogue to promote policies which help to preserve Indigenous lives, identities, values and cultures.

There are 770 million Indigenous people across 90 countries, constituting six per cent of the global population, living in many biodiverse regions, the President noted. And yet “capitalist greed” has left them among the poorest 15 per cent of the population, he stated.

UN Photo/Manuel Elias
Cultural performance by the Kwakwaka Dancers at the High-level Event to launch the International Year of Indigenous Languages.

Warning that greed was driving the move to annex yet more indigenous resources, he said that there was a “criminal silence” on the part of world leaders “when it comes to speaking out against these phenomena”, pointing out the hypocrisy of lecturing indigenous people about democracy and human rights, while quashing their community identities and suppressing languages at risk of dying out.

“Language is culture, language is an expression of a cosmovision and that is a way of seeing the world”, he said. “If languages disappear… the memories that they bear will disappear as well as the people that speak them”.

Encouraging everyone to “preserve the knowledge and wisdom of our ancestors”, Mr. Morales urged that a new paradigm be ushered in, one which is the fruit of indigenous peoples and “champions the Mother Earth”.