The problems of eradicating Ebola in the Democratic Republic of the Congo are not only medical, but also linked “to a variety of political and social factors”, the head of the UN mission in the country told the Security Council on Wednesday.

“Along with continuing high levels of community distrust around the response to the epidemic”, Leila Zerrougui – UN Special Representative and head of the UN’s Stabilization Mission (MONUSCO) – said that militants, including the ADF and Mai-Mai groups, have caused “a deadly environment” for the people working to counter the virus, “to the point of being specifically threatened and killed by armed groups”.

She stated that the Ebola epidemic has now “claimed the lives of more than 1,700 people” and recent isolated cases in Goma and across the border in Uganda “have heightened concerns about its spread outside of the Beni and Butembo areas”.

This led the World Health Organization (WHO) to declare the epidemic an official  Public Health Emergency of International Concern last week. Ms. Zerrougui also underlined the “serious need” to finance the response to other epidemiological and humanitarian crises in the DRC.

“The measles outbreak, for example, has already claimed the lives of more than 2,000 people since the beginning of this year, even more than Ebola”, she said.

She informed the council that MONUSCO has closed several field offices in areas where there is no longer armed conflict, which “will permit us to concentrate our resources on…strengthening of State institutions” and protect civilians “in areas where conflict and activities of armed groups continue to have a devastating impact”.

On the security situation, the Special Representative pointed out that over the past weeks, violence has risen in several areas in the eastern part of the country.

“I am concerned with the current situation in Ituri province, where spoilers are seeking to play on ethnic tensions to instigate inter-community violence”, she said, adding that attacks by the ADF “continue to exact an intolerable toll on civilians”.

In Masisi, she said armed groups had been responsible for other atrocities, notably conflict-related sexual violence.

Violence continues to be the main driver of humanitarian need in the DRC, spelled out Ms. Zerrougui. “As a result, the country is currently facing simultaneous emergency situations, including mass displacement and protection threats”.

Following renewed violence, more than 350,000 people have been displaced in Ituri and 733,000 people need assistance. In South Kivu, the flareup in intercommunity violence and armed group activity has displaced up to 180,000 people.

The MONUSCO chief told the Chamber that the mission was adopting a “One UN approach” that combines different tools at both national and provincial levels, to defuse social and political tensions.

MONUSCO supports both Congolese security forces and is responding itself to armed groups, she said, as well as helping strengthen the Congolese justice system to fight impunity.

On the humanitarian front, she said MONUSCO is also providing support to the newly appointed UN Ebola Emergency Response Coordinator.

She drew the Council’s attention to the increasing number of armed combatants who have expressed a willingness to lay down their weapons since President Tshisekedi took office, asserting: “The broad integration of ex-combatants into the army and police forces in previous years only led to the degradation of their capacities, the hijacking of security policy by parallel networks, and incentivizing the creation of illegal armed groups”.

“There is still a great deal of work that lies before us as we continue the process of charting MONUSCO’s future drawdown and exit”, she said, noting that MONUSCO’s budgetary challenges “are stretching our resources to the limit”.
In conclusion, Ms. Zerrougui pressed for the Council’s support, saying it is “critical to the ultimate success of the Mission, and its ability to exit the DRC under the appropriate conditions”.

In his capacity as chair of the 1533 DRC Sanctions Committee, Mansour Al-Otaibi of Kuwait briefed the Council on his recent visit to the DRC, where several interlocutors called for the sanctions list to be updated and reorganized to identify those who are threatening the political transition and those currently committing grave human rights violations.

During the visit, some Committee members noted “a clear difference” between “the rhetoric” of the delegation during a meeting with the outgoing Congolese Government and the incoming President’s “positive public statements on the work of MONUSCO”.
Ambassador Al-Otaibi said that on 9 August, the Committee would hold a briefing for all Member States on a Group of Experts report and on his recent visit. 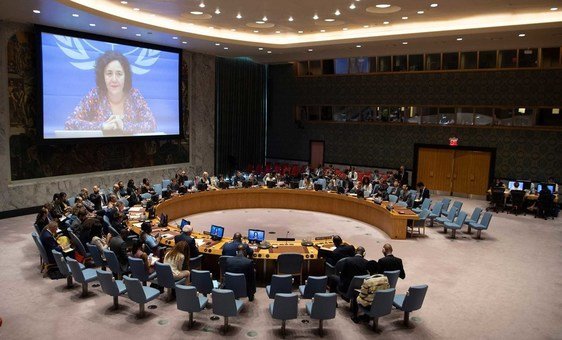 Leila Zerrougui (on screen), Special Representative of the Secretary-General and Head of the UN Organization Stabilization Mission in the Democratic Republic of the Congo, briefs the Security Council., by UN Photo/Eskinder Debebe