Op-Ed: Liberia’s promising future is a symbol of international solidarity


Liberia’s promising future is a symbol of international solidarity

Amina J. Mohammed, the Deputy Secretary-General of the United Nations, previously served as the minister of environment for Nigeria and the special adviser to the secretary-general on post-2015 development planning. The opinions expressed in this commentary are solely those of the author. 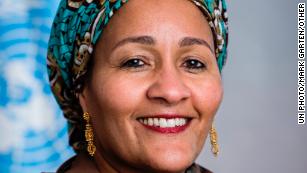 (CNN) – Gwendolyn Myers, founder of Liberia’s Messengers of Peace civil society organization, and Jefferson Koijee, youngest-ever mayor of Monrovia, were born after the outbreak of war in their country 28 years ago. Like most of Liberia’s young people, who make up the majority of the country’s population, they have known only war or post-conflict recovery.

But both harbor a strong desire to be at the helm of transforming their country and shaping a prosperous future for its citizens.

I visited Liberia last week to celebrate a new era in the nation’s history, ushered in by successful elections and by the end of a 15-year United Nations peacekeeping mission, United Nations Mission in Liberia, or UNMIL. I was deeply moved, both as a senior official of the United Nations and as a daughter of West Africa, to be told by youth activists, women leaders, civil society representatives, members of government and the new President himself that a grateful nation will never forget UNMIL’s contribution to peace.

The mission’s flag was lowered on March 30, but the UN family will stay on to accompany the country’s efforts for stability and development.

I was inspired by what I saw on the streets of Monrovia. A city once a symbol of horror and brutality today bustles with energy, commerce and opportunity. It was hard not to be touched by the pride of UNMIL’s personnel in their contributions to upholding the ideals of our organization and promoting peace. Where once there was palpable fear about a future without the peacekeeping operation, today confidence has been restored, and Liberia, a founding member of the United Nations, has hope.

Deputy Secretary-General @AminaJMohammed meets beneficiaries of a fishery project funded by UNMIL in New Kru town, outside Monrovia, during her visit to #Liberia to attend celebrations of the completion of the Mission’s mandate. [Photo: 22 March 2018] pic.twitter.com/2KKd1HC912

Liberia in 2003 was a country in ruins, with an entirely traumatized and marginalized population. As a result of the civil war, far too many citizens suffered from human rights violations, far too many families were displaced, far too many women and girls were victims of sexual violence. And we know that the very institutions that should have protected people were among the factions committing atrocities.
Fortunately, the world acted. The Economic Community of West African States deployed troops to help stabilize the situation. Blue helmets arrived.

Over the course of its deployment, UNMIL helped to disarm and demobilize more than 100,000 combatants, rebuild the police and other security services, facilitate the provision of humanitarian assistance and the development of national capacity to protect human rights, while supporting the government’s efforts to extend its authority throughout the country. There has not been a major security incident in Liberia in more than a decade.

President George Weah, a son of Monrovia’s Clara Town slum, has articulated a “pro-poor” vision of governance and development based on the tenets of reconciliation, inclusion and transparency, and on the principle underlying the Sustainable Development Goals that no one should be left behind.

Liberia now brims with the promise of its youth, who have become the custodians of its peace. Space has opened for the meaningful participation of young people in leadership positions.

Securing the investment made in Liberia through the deployment of UNMIL will require continued investment and partnership. As is said in my country, we must “shine our eye” — we must look deeply at what is really happening in Liberia. Many Liberians still await the anticipated dividends of peace, and they have high expectations of the new government. Many of the root causes of conflict still need to be addressed. Too many Liberian lives are constrained by illiteracy, poverty and a lack of opportunities.

Liberians must forge an inclusive process for sustainable development that will secure the hard-won peace and allow dynamic young people such as Ms. Meyers and Mr. Koijee to fulfill their dreams. The United Nations will continue to be the country’s strong partner in this work.

Liberia is an inspiring example of what the best of humanity can offer to overcome some of the worst of what humanity can do. It is also testimony to the immense value of UN peacekeeping and the international solidarity that underpins effective operations. Now, together, we can and must ensure that Liberia seizes this golden opportunity for progress and peace.