From drugs control, to indigenous people’s rights and counter-terrorism, the UN General Assembly’s Third Committee is officially known as the Social, Humanitarian and Cultural Affairs Committee, with the full array of complex issues and challenges to mull over that its title would imply. Here’s the latest in our series of explainers on how the ideas and pledges of world leaders each September, are turned into action by Member States in the weeks after they go home.

This year’s busy session homed in on the advancement of women; promotion of fundamental freedoms through elimination of racism and discrimination; and also addressed social development questions related to youth, aging, and persons with disabilities.

Guiding all these discussions, is no small task, and for this year’s 73rd General Assembly session, that has been the task of Committee Chair Mahmoud Saikal, who also serves as Afghanistan’s Permanent Representative to the United Nations.

In an interview with UN News, he explained how discussions had begun in October to shape the substance of detailed dialogue in November, over the priority issues.

Mr. Saikal pointed out that a good 50 percent of this work is anchored in human rights, explaining that “what are most important ultimately that comes from the Third Committee are the resolutions.”

A lesser-known but historic contribution made by the Committee was its instrumental role in drafting the Universal Declaration of Human Rights, 70 years ago – an milestone that was celebrated at length this month.

In all, 81 meetings were held to discuss the draft of the document, before it was adopted as a resolution, now the most translated text in the world. If you want to  get a sense of what it must have been like back in 1948, here’s one of the original Committee documents from that era.

What emerged from the many drafts and sit-downs by Committee members, working with the UN Commission on Human Rights, and the UN’s Economic and Social Council (ECOSOC), was a milestone document which recognizes the inherent dignity and inalienable rights of all people, as “a foundation of freedom, peace and justice in the world.”

Today, one of the Committee’s many emphases in the realm of human rights has to do with refugees. Just this year, the Committee had a hand in ramping up support for people fleeing their home countries, and those that take them in, through the Global Compact on Refugees. 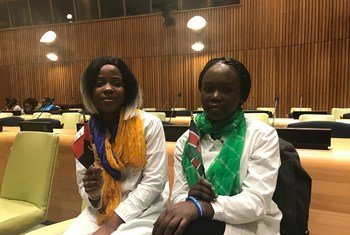 Mr. Saikal described the non-binding agreement, affirmed by the General Assembly on 17 December of this year, as “going beyond the traditional way of handling the refugee crisis” as it works to appeal to non-state actors, the private sector, and civil society, to place an emphasis “on addressing the root causes of the conflict. We cannot be divorced of that.”

Mr. Saikal, who fled persecution from Afghanistan himself, aged 19, explained that having lived the experience of the nearly 70 million refugees around the world has shaped his ability to fulfill his duties on the Committee: “I’ve been through it myself. What was important for me was the motivation to stand on my own feet.”

“I’m going to use my own brain, my own skills,” he told himself. “I’m not going to allow people to treat me as a refugee.” He then resolved to give back by championing refugees during his diplomatic career, seeking to empower them.

Under his leadership, Afghanistan has secured it first-ever seat on the Human Rights Council, and now looking forward, the Third Committee chair says his ties with home, and his UN experience, continues to drive his hopes for the future.

A host of issues will be up for discussion in the upcoming year: Violence against women, protection of the rights of children, crime prevention and criminal justice, and international drug control revitalization. Topics will be, as usual, prioritized depending on the substance of reports from the field, which bring “the flesh and blood” to the committee’s work.

The United Nations at large, “is one of the biggest achievements of mankind,” Mr. Saikal said, however the challenge remains to make it more relevant to the lives of people who truly need the organization’s support.

The best evidence of this is implementation. “There needs to be follow-up,” he told UN News.

“I’m keen to see what we do this year. Where will it go when it comes to the lives of people around the world? It’s always in the back of my mind as we give hours, days, and weeks in the service of human rights.”