The Holocaust illustrates how easily “people can move from condoning brutality, to committing genocide” and shows that “leaders who sanction hate speech or make anti-Semitic or xenophobic slurs” are encouraging their own citizens “to do the same”, the UN’s head of Global Communications told leading members of the Jewish community at UN Headquarters in New York on Thursday.

Alison Smale led the briefing, which focused on the little-known record of Albanians during the Holocaust, who took in thousands of Jews who would otherwise have ended up in the Nazi death camps.

Under the theme: “Holocaust Remembrance: Demand and Defend your Human Rights”, it was one of the main events marking International Holocaust Remembrance Day throughout this week of reflection on the industrial-scale genocide of approximately six million European Jews during World War Two.

“While this occurred, there were individuals and countries that demonstrated tremendous courage to save Jews”, Ms. Smale told those attending, the multimedia event.

“Rescuers made the brave choice to help in full knowledge of the grave consequences they, their families and community would face should they have been found helping Jewish people” she spelled out.

Recognizing Albania’s response as an example of moral courage, Ms. Smale said that it “embodies the principles of the Universal Declaration of Human Rights, that everyone has the right to life, liberty and security of person.”

She said that the Albanian response also showed that everyone has a responsibility to defend human rights, identify strategies to protect those rights, and learn the consequences of inaction.

“Today, we witness populism, xenophobia, Neo-Nazism and hate groups on the rise, fueling anti-Semitism and other forms of hatred around the world”, she explained, stressing the role of civil society in documenting hate speech and hate crimes as “critical” to learn how to effectively address hatred, challenge its root causes and build resilient and just communities.

“Understanding the significance of historic actions taken to defend human rights – such as in Albania – is the first step towards encouraging such positive behavior among people today”, Ms. Smale underscored. 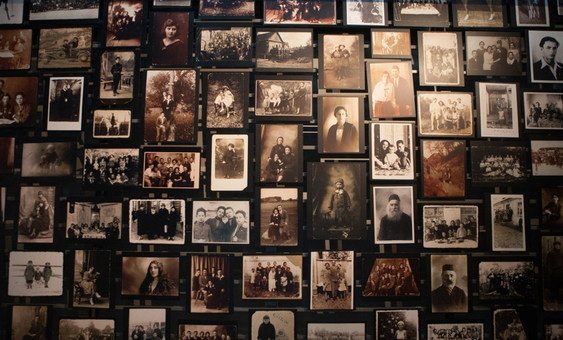 Close up of photos in the U.S. Holocaust Memorial Museum.

The event featured video clips from the film “The Albanian Code”, which shines a light on the role that the rugged and historically-rich Balkan country played to rescue Jews, interspersed with remarks and observations from Albania’s UN Ambassador Besiana Kadare; Ronald Lauder, President of the World Jewish Congress; and Robert Singer, Chief Executive of the World Jewish Congress. Ms. Smale thanked all three for supporting the event and for “their commitment to Holocaust remembrance.”

Also taking part were Majlinda Myrto, Executive Director of the “Eye Contact Foundation”, whose family is honoured as “Righteous Among the Nations” for rescuing a Jewish family during the Holocaust, along with Anna Kohen, a child of Holocaust survivors who found a safe haven in Albania; and David Estrin, Founder of the youth organization “Together We Remember”.

“Learning about the history of Albania’s response during the Holocaust is important because it demonstrates compassionate behavior” explained Ms. Smale.

“It reminds us that we are all responsible for each other.  We all have a role to play in demanding and defending human rights,” concluded the head of UN Global Communications.