The top UN official charged with representing the interests of children caught up in armed conflict, has signed a landmark new agreement on child protection with the Force Commander of a main Syrian opposition military alliance, it was announced on Monday, aimed at ending and preventing the recruitment and use of children under the age of 18.

Describing the action plan as “the beginning of a process”,  and “an important day”, Virginia Gamba, Special Representative of the Secretary-General for Children and Armed Conflict (CAAC), explained that the signing “demonstrates a significant commitment by the SDF to ensure that no child is recruited and used by any entity operating under its umbrella”.

Ms. Gamba and Force Commander General Mazloum Abdi endorsed the agreement during an official ceremony at the Palais des Nations, in Geneva, on Saturday.

The Action Plan follows the listing of the United States-backed People’s Protection Units (YPG/YPJ) in the Secretary-General’s annual report on Children and Armed Conflict regarding the recruitment and use of children. The units operate under SDF command, which describes itself as committed to a secular, democratic and decentralized Syria.

The Action Plan obliges the SDF to:

The Action Plan was the result of months of UN-SDF engagement, in close consultation with the Special Representative. 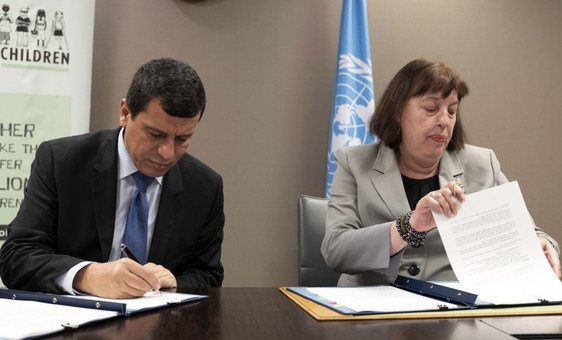 Commending the work of child protection partners on the ground, Ms. Gamba lamented that the situation of children in Syria remains one of the most dire on her agenda.

The Special Representative highlighted the importance of Actions Plans to engage with parties to conflict, noting that since Security Council resolution 1460 was adopted in 2003, they have been strong tools of the CAAC mandate.

“Actions Plans represent an opportunity for parties to change their attitude and behavior so that grave violations against children stop and are prevented to durably improve the protection of children affected by armed conflict”, Ms. Gamba explained.

“I urge all parties listed in the annexes of the Secretary-General annual report, in Syria and elsewhere, to seize the opportunity to engage with the UN and adopt Action Plans,” the Special Representative added.

As the conflict continues in its ninth year, the Ms. Gamba encouraged all parties to work towards a political solution, in accordance with UN Security Council resolution 2254 of 2015 to bring sustainable peace to the country: the best option to prevent grave violations against children.