Progress has been made in consolidating democracy in West Africa and the Sahel, according to the United Nation’s Special Representative in the region on Wednesday, who cited successful elections and “political dialogues” as part of the advances made.

In the past six months, presidential polls have taken place in Nigeria (23 February), Senegal (24 February) and Mauritania (22 June), Mohammad Ibn Chambas, who also heads the UN Office for West Africa and the Sahel (UNOWAS), told the Security Council.

Ahead of the “fiercely contested elections”, he said that he conveyed to all presidential candidates, regional and international partners, “the need to uphold the high electoral standards in the region”.

Beyond relatively smooth electoral processes, he continued, “the past six months also saw the opening of political dialogues between the ruling government and the opposition in Burkina Faso and Benin, while in Ghana, political stakeholders started a dialogue on vigilante groups”.

Moreover, just this month in Liberia, “the government respected the people s right to peaceful protests and agreed to begin a dialogue on strengthening the economy”, he affirmed.

However, Mr. Chambas pointed out that pre-electoral and post-electoral periods “continue to be characterized by tensions, antagonistic contests and disputes, including around non-consensual constitutional amendments”.

“Addressing such potential sources of conflict remains a major priority ahead of the upcoming cycle of high-stake presidential elections in West Africa scheduled for next year in Burkina Faso, Cote d Ivoire, Ghana, Guinea, Niger and Togo”, he explained, noting that tensions around electoral periods “derail the necessary attention to the pressing need to address questions of development and inequality”.

Several countries in the region continue to struggle with human rights challenges. Mr. Chambas expressed particular concern over what he termed “the instrumentalization of the judiciary for political objectives” as well as a “predominant sentiment of impunity for violent crimes”, which undermines the rule of law.

And what’s more, a persistently high level of inequality continues to negatively impact women, “making them prone to gender-based violence”, he observed.

The UNOWAS chief cited “violent extremism” as being responsible for the volatile security situation “in the entire Sahel”.

“Escalating violence and insecurity have sparked an unprecedented humanitarian crisis leaving a total of 5.1 million Burkinabe, Nigeriens and Malians in need”, he detailed.

And while militant Boko Haram splinter groups continue to threaten peace and stability in the Lake Chad Basin, the Multinational Joint Task Force has yielded a 70 per cent reduction of suicide bombers compared to last year.

However, Boko Haram fighters killed 23 Chadian soldiers in the deadliest attack to date while also attempting to launch a rocket attack on Nigeria’s airport in Diffa and, as of June, kidnapped at least 147 civilians in the Diffa region, which Mr. Chambas said was “the highest number since 2015”.

The Special Representative concluded with a message of hope that “the consolidation of democracy can be further entrenched, and the activities of violent extremists can be better addressed, countered, through preventive measures”, to which UNOWAS is committed.

•    Progress has been made.•    Headway has not been linear, but as the result of sometimes “palpably antagonistic” disputes.

•    Advancement has been delayed, complicated and “almost negated” by violent extremism in the region.

•    Moving forward together, there is hope for sustainable peace in the region. 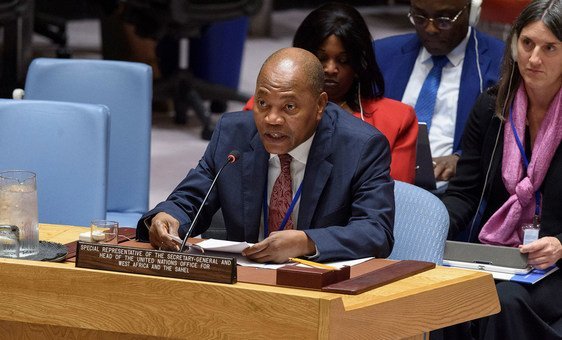