With the total number of recorded patients in and around the North Kivu region standing at 608 of whom 368 have died, DRC is struggling to keep up with its second-deadliest outbreak ever, as healthcare efforts have been disrupted by armed groups, as well as political protests, and the displacement of those potentially-infected.

Director General of the World Health Organization (WHO), Tedros Adhanom Ghebreyesus, on Thursday applauded the response the country has mounted so far, commending Uganda’s history of effective disease prevention, highlighting that the country’s strategies have been “recognized globally.”

Rapid alert, immediate response, and effective field coordination were key features that controlled the largest outbreak ever recorded in Uganda in 2000 and 2001, when 574 people were infected and 261 died. 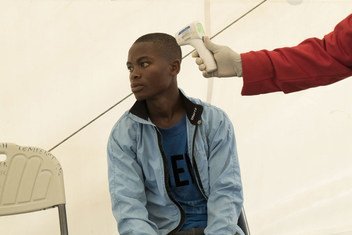 In response to a growing number of infections in DRC, the Ugandan government has prioritized vaccination of frontline health workers, screening travelers at points of entry, and engaging in risk communication.

These preventative measures said Mr. Ghebreyesus, speaking alongside the Ugandan Prime Minister in the capital Kampala, “will go a long way” towards saving the lives of health workers; adding that WHO is “really grateful for the government’s commitment and support.”

The need to amplify primary healthcare in order to prevent diseases, is vital for Uganda, Mr. Ghebryesus stressed, and prevention of communicable and non-communicable disease are key to achieving Universal Health Coverage.

In getting to the root of stopping the spread of Ebola across the border, WHO has said that these encounters with deadly pathogens can also heavily undermine weak health systems, and allow viruses to spiral out of control.

Ugandan Prime Minister, Dr. Ruhakana Rugunda expressed appreciation for WHO’s support, saying that “whatever Uganda has managed to achieve in public health is because of the general leadership of WHO.”

Achieving healthcare for all “is key to tackling many of the afflictions we are getting,” Mr. Rugunda highlighted. “We have no choice but to support public healthcare.”